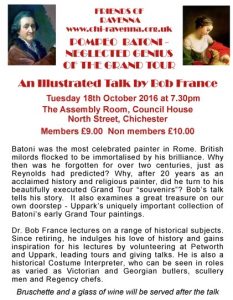 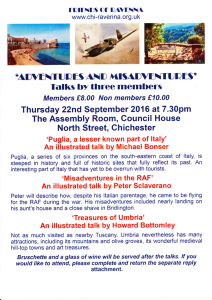 The committee has arranged the following topics and talks for the new Association year beginning in September 2016. The full details of each event will be published as they become current.

Meanwhile, here is a summary to whet your appetite!

Thursday September 22nd 2016 – Venue : The Assembly Room
Three short illustrated presentations to be given by members
Mike Bonser – Puglia – a lesser known part of Italy
Howard Bottomley – Treasures of Umbria
Peter Sclaverano – Re-living some of his wartime experiences in the R A F

Wednesday November 2nd 2016 – A visit to the Mayflower Theatre, Southampton for a performance of Verdi’s “Macbeth” by Welsh National Opera

May 2017 – (Date T.B.A.) – usually reserved for the Annual Dinner, to be arranged nearer the time

Wednesday June 14th 2017 –  The Annual General Meeting, to be followed by a talk 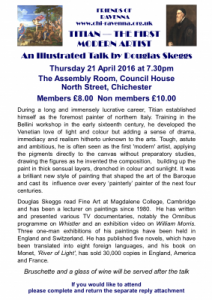 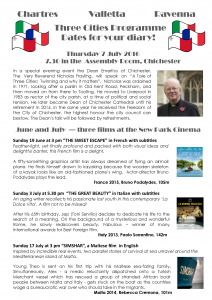 Some viewer’s comments on our Christmas Zoom Meeting!